Susan Rogers Professional of the Year 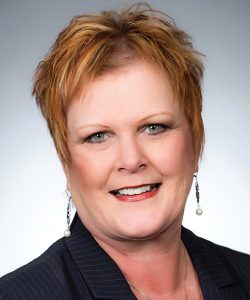 OKLAHOMA CITY – Tinker Federal Credit Union (TFCU) Senior Vice President of Human Resources Susan Rogers was named Human Resources (HR) Professional of the Year at the 2015 Cornerstone Credit Union League’s HR Conference in Oklahoma City. The award was created by Cornerstone’s HR Council in 2014 to honor and recognize an outstanding human resources professional who has served and contributed to the advancement of human resources within the credit union movement.

Rogers has worked in human resources for 37 years, 26 of them at TFCU. Her expertise has been critical for TFCU, with its diverse organizational structure and a workforce of more than 600 employees. Rogers participates directly in the strategic planning process and the development of TFCU’s annual five-year plan.

As a TFCU representative who advocates creating a diverse work environment, Rogers served as the business coordinator for INROADS OK, an organization that developed and placed talented underserved youth in business and industry and prepared them for corporate and community leadership. She has also supported the development of a training system for tellers that has evolved into a comprehensive university program designed to communicate the organization’s culture and foster the development of employee job skills such as leadership, creative thinking and problem solving.

Rogers holds a Bachelor of Science degree from Southern Nazarene University in organizational leadership. She also received her Senior Professional in Human Resources designation in 1996, and participated in the Certified Credit Union Executive Program.

“We are definitely a better credit union and employer because of her expertise,” said TFCU President/CEO Mike Kloiber. “There’s no better employee advocate, no one who is more concerned with our employees and the integration of their daily efforts to reach our service promises to our members.”

TFCU is the largest credit union in Oklahoma, with $3.3 billion in assets and over 305,000 members.