OKLAHOMA CITY – Tinker Federal Credit Union (TFCU) Senior Vice President/Director of Marketing Matthew Stratton was honored as the recipient of the 2014 Troy Higgins Political Activist of the Year Award, presented to him recently by the Oklahoma Credit Union Political Action Committee. This award recognizes his achievements in advocating for credit unions and their members at the capitols in both Oklahoma City and Washington, D.C.

“Matt has served as TFCU’s governmental affairs liaison for well over a decade,” said TFCU President/Chief Executive Officer Michael D. Kloiber. “and he is very deserving of this award for his tireless efforts. He spends many hours reviewing new bills that could affect credit unions and actively pursuing an outcome that will benefit the credit union movement and protect the rights of credit union members.”

TFCU is the largest credit union in Oklahoma, with over $3.3 billion in assets and over 300,000 members. 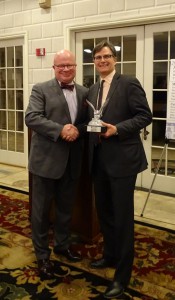 Photo: Matthew Stratton (at right) is presented the 2014 Troy Higgins Political Activist of the Year Award by Nate Webb, president of the Oklahoma Credit Union Association.